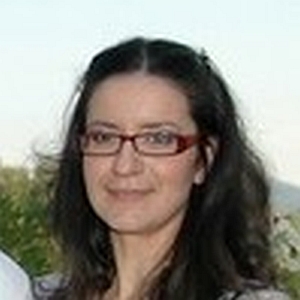 Paraskevi (Vivian) Dimitriou obtained a B.Sc. degree in Physics at the National Kapodistrian University of Athens in 1991 and a DPhil degree at the University of Oxford in 1996. She was awarded a scholarship from the State Scholarship Foundation (IKY) to carry out her PhD studies.  After her studies she held the following posts: European Mobility Training Network position at Universitѐ Paris VI, Paris (6 months), INFN Postdoctoral Fellowship at Universita degli studi di Pavia-INFN sezione di Pavia (1996-1998), Postdoctoral Fellowship at the Institute of Nuclear Physics, NCSR Demokritos, Athens (1998-2002), Marie Curie Fellowship (FP6) at the Universite Libre de Bruxelles, Brussels (2002-2004). In 2005 she was a visiting scientist at the Universite catholique de Louvain-la-Neuve and a Research Associate at the Institute of Nuclear Physics, NCSR Demokritos were she held a European Reintegration Grant (FP6). Since 2006 she has been working at the Institute of Nuclear and Particle Physics, NCSR Demokritos.

Her main research interests include modelling of nuclear reactions for applications in nuclear astrophysics, materials sciences, medical and energy applications. At Demokritos she focused on nuclear reactions relevant to the p process of nucleosynthesis. She was scientific secretary of the first International Symposium on p process held in Vravrona (2001), and the three international conferences on FINUSTAR (2005, 2007, 2010) organized by the nuclear astrophysics group at INPP. In 2011 she organized the International Workshop on Thermal Nuclear Reactions Rates for Astrophysics Applications (THERRAA).

From 2012 to 2019 she held the position of Nuclear Data Physicist at the International Atomic Energy Agency and worked in the field of nuclear data. During this period she was the scientific secretary of the International Network of Nuclear Structure and Decay Data and Director of 4 Joint IAEA-ICTP Workshops. She coordinated international coordinated research projects and data development projects.

Her current activities include modelling of nuclear reactions for p- and r-process nucleosynthesis, and the evaluation of nuclear reactions and decay data for energy applications, materials sciences and nuclear astrophysics. She is participating in two IAEA projects: R-matrix Calculations for Charged-particle Reactions in the Resolved-Resonance Region/INDEN for Light Elements and Decay Data for Monitoring Applications.