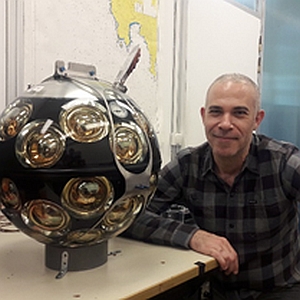 Giorgos Androulakis has been working at INP-NSCR Demokritos since mid 2014 as scientific support staff. He is a graduate of the Physics department of the University of Thessaloniki and holds a Masters degree in theoretical Physics from the University of Utrecht. At INPP he has been actively involved in the following research projects:
“KM3NeT – Astroparticle and Oscillations Research with Cosmics in the Abyss (ARCA and ORCA)”
“GRBNeT – Study, design, construction and setting of autonomous linear array of neutrino detectors in deep sea to investigate the nature of Gamma Ray Bursts”
His involvement in KM3NeT started as a member of the QA/QC group providing IT support but as of January 2016 he has evolved into the QA/QC manager, leading one of the largest sub-groups in KM3NeT in terms of human resources. Under this capacity, he is de-facto member of the KM3NeT management team as well as the steering committee. His major contributions as a QA/QC manager were the establishment of a fully automated and data-base based QA/QC system, capable of handling the increased QA/QC needs for the increased production foreseen for KM3NeT phase 2.0 and the qualification of all members of the KM3NeT group as ISO 9001:2015 internal auditors.
Before INPP, Giorgos Androulakis had been an employee of TEI of Crete, department of Electronics (2007-2014). Apart from teaching several laboratory courses, GA was member of the personnel of CPPL (Laser and Plasma Physics laboratory of TEI of Crete) – coordinator of the Fundamental Science Program of the HiPER project and had active involvement in the following research projects: Marie Curie ToK Project “Development of an Innovative X–ray source”,(2007-2009); “Design and Implementation of a Pulsed Neutron Source”,(2012-2013), funded by ARCHIMEDES III, action 16.