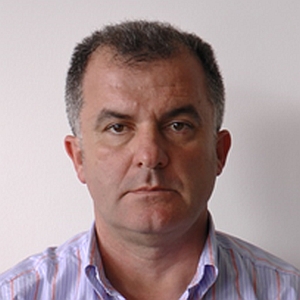 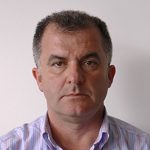 Dr. Georgios D. Stavropoulos was born in Athens in 1963. He received his B.Sc. in Physics in 1987 from the University of Athens and his Ph.D. in Experimental High Energy Physics in June 1993 by the National Technical University of Athens (NTUA). He has carried out experimental research in Particle Physics at the University of Dortmund (DE), CERN (CH), Berkeley University (USA) and National Technical University (GR). Since June 2007, he has been working at the Institute of Nuclear and Particle Physics (INPP). In the framework of the ATLAS/LHC experiment at CERN, he coordinated the work of the muon physics and software development group. He has been appointed (2012-2014) as one of the three Installation Site Managers in the executive board of KM3NeT with the mandate to oversee the KM3NeT installation activities at the Greek Site. He has participated, as scientist in charge, in research projects funded by the European Union and the Greek General Secretariat for Research and Technology. He has co-authored over 280 articles in High Energy and Astroparticle Physics in peer reviewed journals. His current research activities focus on the commissioning and integration of the ATLAS NSW, on the development of the ATLAS reconstruction software and on the development of innovative opto-electric sensors for various applications.