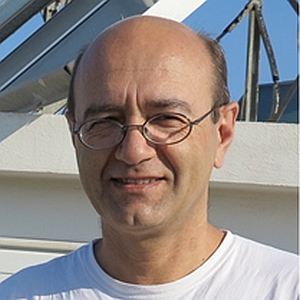 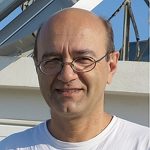 Dr. Theodoros Geralis is Director of Research at the Institute of Nuclear and Particle Physics at NCSR Demokritos, Athens, Greece. He received his Diploma from the Physics Department of the University of Athens and the PhD from the NTU Athens/CPPM Marseille. He was employed at: NCSR Demokritos as a fellow (1985 – 1988)), the CPPM Marseille as PhD fellow (1988 – 1991), ETH Zurich (1992 – 1993) as Post Doc, Rutherford Appleton Laboratory (1994 – 1997) as Senior Research Associate, NTUA (1998) PostDoc, NCSR Demokritos (1999 – 2002) Post Doc.  Theodoros Geralis became staff at NCSR Demokritos in 2003 (Researcher grade C’) and was promoted to Senior Researcher (2007) and Director of Research (2013).  He has participated in the following particle physics experiments and projects at CERN: CPLEAR, OPAL, DELPHI, CMS, CAST, RD51 and recently in ATLAS. His specialization is on instrumentation on Micro Pattern Gaseous Detectors (MPGDs) and particularly on Micromegas with important achievements the Segmented Mesh Micromegas, the resistive Micromegas for high rates and the application of graphene in Micromegas manufacturing. He is also expert on triggering and data acquisition and devoted significant amount of his work on Physics Analysis. He has been leading the effort of various teams (CMS group at Demokritos, TriDas group at Demokritos, etc) and has organized major instrumentation conferences (all MPGD series since 2009). He is Editor and referee and major Journals (JINST, NIM A and Journal of Physics G). Theodoros Geralis devotes significant time for Education and Outreach. He has supervised large number of students for their PhD, Master, Diploma and Practical work and has communicated to the public and the pupils many popularized presentations. He has published 1099 papers in international peer review journals with an average of 59 citations/paper excluding self citations.