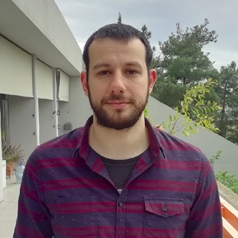 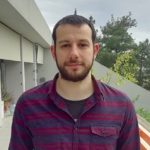 Dimitris Stavropoulos is a PhD student at the Institute of Nuclear and Particle Physics working for the KM3NeT underwater neutrino experiment as a member of the Astroparticle Physics Group. He has graduated from the School of Applied Mathematical and Physical Sciences at the National Technical University of Athens (2011-2017). He has also obtained the MSc “Physics and Technological Applications” degree (2017-2019) from NTUA-NCSR “Demokritos”.
His research interests focus mainly on the study of the quality of the data collected by the KM3NeT-ARCA detector. For his MSc thesis he has carried out a long-term study of the performance of the ARCA detector. For his Bachelor thesis he performed a study of the dependence of the detection of atmospheric muons on sea depth using the first data KM3NeT-ARCA detector.
He has also been involved in the calibration and tests of KM3NeT detector components performed in the DOMLab of INPP. In addition, he is a member of the “Calibration Working Group” and “Operation & Analysis Working Group” in the KM3NeT collaboration.